When I turned 13, I had a birthday party where the only gifts I got were scented candles, picture frames and decorative journals.

It was the end of the 7th grade and all the girls I knew at school and dance lessons had come to some sort of unspoken agreement that it was time to act like grown-ups. Or at least, how we thought our moms acted.

After all, we were all menstruating now, and some of us (me included) were even tall enough to shop at adult stores. We completely gave up on the teen and tween sections that had been designed specifically to cater to our demographic, probably after a lot of expensive market research.

My best friends, most of whom still slept with stuffed animals and hadn’t got around to putting their Barbies into storage, were suddenly acting as though they were ready to embrace womanhood—to give up games and toys for the things we would need to start homes and establish careers. In reality, my bedroom looked like an aisle at Hallmark.

As I pulled fluffy tissue out of each floral bag at my party, I would coo over the natural beeswax, thoughtful choice of colour or inspirational phrasing on whatever unmemorable thing was inside. (A boyfriend would later tell me I’m really good at receiving gifts, whatever that means.)

But after the celebrations were over, I spent the rest of the summer’s evenings playing basketball and ping-pong with the kids on my street, mostly dudes who didn’t give a flying flip about scented candles.

One older boy bought a cheap plastic ride-on toy made for toddlers. We all took turns scraping our knees, zooming around the court at the end of the street yelling “RUBBER BABY BUGGY BUMPER.” To this day, I have no idea why.

Amazing how you only want to grow up until you do.

Years later, I’m be more likely to get a kooky figurine (read: toy) or game from a friend than ever before. There’s only one picture frame in my house. And I’ve donated all the too-decorative-to-be-useful journals I received over the years.

But whether it’s nostalgia or some other force, I do love a good scented candle. I light one almost every night.

Here’s a cozy cover I made to soften the glow of a new one: 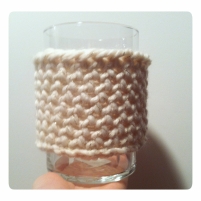 This cover was made in the round on a the smallest circle loom that comes in the four-pack, you can make the sleeve as long as you’d like, and then stretch it around the glass – this one came from the dollar store!

To let the light through, use the Diamond Lace of Figure 8 stitch. And if you need a reminder on a super-stretch bind off, that’s here.

The yarn I used was Lion Brand Thick & Quick in the colour “Starlight.”

The flower was made with the second-largest pink circle on the Clover “Hana-Ami” flower loom. Get a flower loom here. And learn how to use it here.

So, what did you do this week?

Looking for a thread… 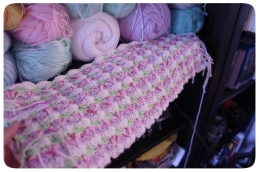