I met Holly when I was a baby.

Our moms, no doubt looking for camaraderie in the challenging and often solitary world of first-time parenting, had signed up for a local baby group. I was born in June, and then she came into the world in August.

In many ways, we’ve long been opposites. I was a precocious child, while she was painfully shy. I wore dresses – she hated them. As teens, I became the bookish and calculating one, while she got a part-time job and a boyfriend… and then eventually moved across the country after university, because why not?

She loved it out by the water, and never looked back.

Now, my longest-time friend has just delivered a baby of her very own. A sweet little nugget named Jack.

Since Holly was the one who inspired me to learn crochet (she also knits and sews – you can find her stuff here), I knew I wanted to bring some of my own yarn love to the little man who I’m excited to meet next month. I also wanted to represent the province where this family is making their home – on the coast of Newfoundland.

Inspired by a trip out East for her wedding last year (if you haven’t been, it’s a whole other world out there!), I went with a beach-and-boats theme for my gift. I took inspiration from a number of different patterns around the internet (linked below) to put it all together. So nice to sit after work, stitching and thinking about a new life set to begin.

I loved making this blanket and I can’t help but think this could have been sweet and fun as an “Under the Sea” theme with more detailed aquatic appliques.

I was really happy with my sewing too. From the back view you can hardly tell there’s so much detail on the other side – I actually just like the simple wave pattern. 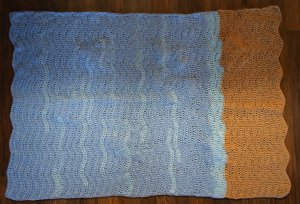 The blanket itself takes its waves from a wavy chevron pattern. I drew inspiration from this simple ripple pattern.

I used an “I” hook and three kinds of yarn. The sandy effect came from (I think – there was no label) Patons Smoothie DK yarn. The blue was Red Heart Soft from Michaels. I alternated the two blue colours to make it look more like caps on a wave – not sure if you can tell the difference from the photos. I might use more varied colour if I were to do it again.

Then I did the appliqués!

Here’s a link to the sailboat pattern/video I was inspired by.

Here’s a link to the simple fish pattern I was inspired by. It’s the goldfish one, but there some bonus guppy patterns too, if you prefer! 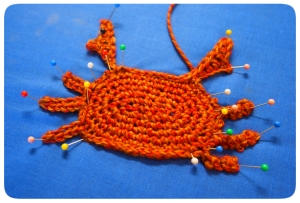 Here’s a link to the crab pattern that I used for the CLAWS ONLY. The body was just an oval that I did freehand. You can do her body, if you want yours to be round. Or make your own oval! I’ve included a picture of me blocking it because it really needed it…

Here’s a link to the starfish pattern I was inspired by. I added a white border to mine…

So, what did you make this week?

Looking for a thread… 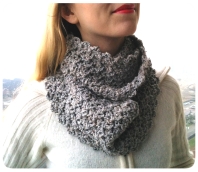 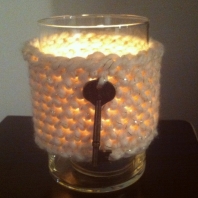